Request: "Point" Object, for use with Polylines 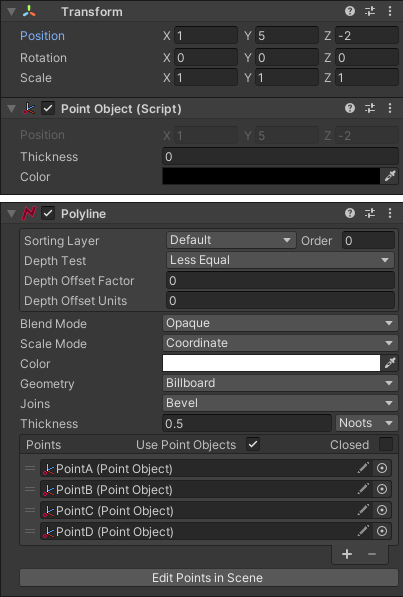 One of the limitations with Polylines (due to Unity!) is that there's no way to animate data contained in Arrays or Lists. But there's a potential way around this: An external "Point" GameObject that contains everything the Polyline needs to know. You may not be able to animate the properties of a List of GameObjects, but anyone can animate the GameObjects themselves without any issue.

This would also open up Polylines for more complex effects, for example:

- A Point that belongs to multiple Polylines, or the ability to use the same Point more than once

- A Polyline with animated thickness and colors, without the need for code

Hate to bump this, but I realized I managed to post this on the eve of Shapes' big 3.0.0 release. Just making sure this didn't get overlooked during all that!

It didn't get overlooked! I just didn't have a good answer, my initial thoughts are a little mixed~

part of the reason I'm not sure about it is because this ties into the spline feature request, and if both of these features are implemented they need to work in tandem with each other, which increases the complexity quite a bit

the honest answer is that I'm not sure - it's a lot of editor UI overhead work for me, for something that is relatively easily done with code for users (script that assigns the positions of child transforms every time they move)

Ahh, admittedly I hadn't fully considered how splines factor into it. I was hoping (very optimistically) that a Point would share enough common variables across different line-type shapes, that it could be treated as a common data container if it turned out to be viable as a component.

For what it's worth, the one big reason why I suggested this is because polyline points cannot be controlled at runtime without custom code — there is no codeless solution at the moment. And so for non-programmers (like say, artists or animators), it doesn't matter how easy the code might be; any amount of C# becomes a brick wall. 😅