I'm getting reports of Shapes not rendering when building for certain platforms, and unfortunately I don't know why this keeps happening. There seems to be some cases where GPU instancing doesn't work, even though I've set everything up correctly on my end (as far as I know), and even though the platforms you test on, should support GPU instancing.

This thread will serve as a centralized discussion thread on this issue, as they are likely all related.

However, GPU instancing is the primary way Shapes makes itself performant, you shouldn't have to disable it.

I would start by testing a few things to investigate further:

other than that I'm at as much of a loss as you are - I've implemented instancing support the way one should, it works just fine on many platforms, including iOS and Android for many, so I don't know why it seems to fail in some specific cases. There might be some hidden setting somewhere that disables GPU instancing elsewhere, though that's something I wouldn't know of

Do let me know if you find something out that might help us resolve this!

Hi - I can add to this - the same iOS build I use (2020.3.24 on blank URP project) works correctly both in editor and in standalone build on on M1 Mac Mini. I can see no issues there.

On the iPhone, I noticed it defaulted to "medium" graphics quality, and M1 defaults to "high". I set the iPhone build to high also, but still the issue persists.

Also, I manually made sure that the shaders are in the shadervariants file, and added to the build. I also added a manual line in the scene just to ensure the shader would be noticed by Unity.

Still, no change - the line I added through the scene is visible but the Immediate mode lines are not.

No error or warnings beyond what I posted earlier.

I also attached the Frame Debugger both to the (working) M1 build and the (not working) iphone build.

I just had an issue where turning off GPU Instancing also resolved my issue despite the tested devices supporting GPU Instancing.

I have a feeling this was linked to the way I was possibly animating my ImmediateMode shapes. I was dynamically creating an object and within said object I was animating properties of the object using DOTween. From there I was drawing my shapes with the given properties using the Draw command.

Because the above is pretty vague without my code I'll go ahead and add it below.

This was with the following setup
Unity: 2018.4.30f1
Render Pipeline: Built In
Platforms: Android & iOS

I had this issue on Android, in Unity 2020.3.32f1, specifically with rectangles with rounded corners (immediate mode only) - a Shapes reinstall fixed my issue (after a lot of shaders rebuilt)

I've noticed this issue when rendering discs in immediate mode in 2021.2.9f1. None of the suggestions had helped, but strangely if i add a disc component to the scene (even disabled) all starts to work normally, which is an acceptable workaround for now. Hope that info helps.

Unsure if this helps anyone or if its even relevant. But I had users on my live game, sending support emails on that they could not see the lines/shapes in the game, (very few users have issues, estimating to like 1 out of a 100 devices). I have now figured out that if I swap the shapes from Flat 2D to Billboard it starts to work for these users. I do not know why the Flat 2d is not working on some devices while it works on the majority. Maybe this helps someone.

Not sure if it's the exact same issue because it happened in the Editor for me (haven't checked in build) but some of the symptoms are the same:
- Drawing two Discs (or more) in immediate mode wouldn't display any of them (but drawing only one works).
- Deactivating GPU instancing solves it.
- Unity 2020.3.10f1, URP 8.2.0, Shapes 4.1.3, Platform: Editor

However, I found an acceptable workaround accidentally by doing a clean Shapes reinstall. The reinstall in itself didn't solve it but it made it so that the shaders were compiled using the built-in pipeline despite my project using URP. When I force configure the shaders to use URP, immediate mode stops drawing my Discs (even on a clean Shapes install). So the workaround for me was to leave the shaders compiled for Built-in RP which does not cause negative side effects (yet) as far as I can tell. Not sure if that helps but maybe this is an issue with the way shaders are compiled for URP? 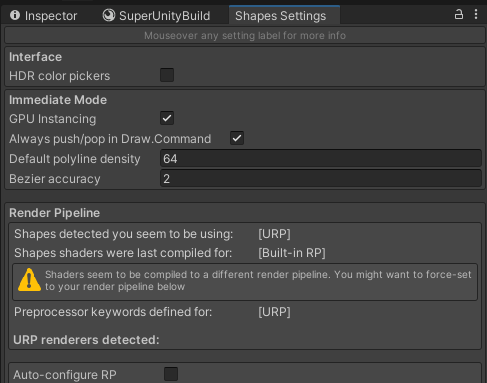 Here's an extremely simple repro case for when this bug occurs on my Pixel 4a running Android 12.

Disabling Shapes' GPU Instancing gets rid of the bug.

Bug happened no matter GPU instancing is on or off.

I'll try "Do a clean reinstall of Shapes" later. hope it helpful.

I have a weird behavior when using shapes with the Hololens 2 (UWP) - specifically when streaming / recording or taking a picture.

The paths get drawn for the user wearing the headset and are visible.

But when evaluating the recordings - all shapes paths are gone. I think it has something to do with the render / capture order of the headset which gets called before shapes had executed its draw command. Is there a way to change when shapes executes the draw command?

Thanks for your help

I have a weird behavior when using shapes with the Hololens 2 (UWP) - specifically when streaming / recording or taking a picture.

The paths get drawn for the user wearing the headset and are visible.

But when evaluating the recordings - all shapes paths are gone. I think it has something to do with the render / capture order of the headset which gets called before shapes had executed its draw command. Is there a way to change when shapes executes the draw command?

Thanks for your help

this sounds like it's more related to how the screenshot/recording utility works than shapes itself - I'd start looking into that!

if you want to change when immediate mode shapes are drawn, then that's the second parameter of Draw.Command